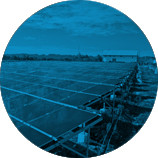 For every country, maintaining a secure and constant supply of energy is a vital part of keeping the economy running. This naturally makes energy security a top priority for all governments. Most countries are dependent on fossil fuel imports – a situation which makes their energy supply insecure in times of political unrest. Instead of focusing on maintaining the supply of fossil fuels which can be challenging and expensive, switching to renewable energy can provide countries with an independent source of energy impervious to security issues and geopolitical ructions.

Renewable-energy technology can be built anywhere and implemented wherever there is a sufficient naturally occurring source of energy like wind, sun or running water. Therefore, the distribution of renewable energy sources is far more even than the distribution of fossil fuel reserves.

The geographic distribution of reserves, production and exports of fossil fuels is highly concentrated in a few regions, some of which are prone to political instability. Over 60% of coal reserves are located in the USA, China and the Former Soviet Union (FSU). Over 75% of natural gas reserves are held by OPEC nations and states of the FSU, and 80% of the global gas market is supplied by the top 10 exporters[1].

Shifting to a renewable energy supply offers a greater potential for universal energy independence across nations and reduces the risk that geopolitical stand-offs pose to a country’s energy supply.[2]

Renewable energy can also help to provide stable energy to rural areas, especially where communities are off grid and may be more dependent on solid fuels for energy. Working on a regional level can also help to secure power supplies. A number of emerging regional power collaborations in East, West and Southern Africa, South and Central America and South East Asia aim to enhance the reliability of electricity grids and therefore local supply.

ESMAP studied 12 sub-regional integration schemes and found that for most schemes energy security was one of the motivating factors. Larger integrated networks may also provide benefits in terms of cost efficiency, trade and more general economic development[4].

Technological advances in the renewable energy industry, focussed on storage and technical balancing, are helping to address the challenges of renewable energy that are related to natural variations like seasonal changes.[5]

At the same time advances in the manufacturing process and economies of scale mean that the costs of renewable energy technologies have fallen significantly and continue to do so. On top of this, once the technology is installed to create electricity, the fuel costs are minimum – if not zero (in the case of wind and solar) – making them more resilient to economic shocks.

China has been heavily investing in renewables to help reduce its reliance on fossil fuel imports and to boost its energy independence[7]. Massive investment and support for renewable energy expansion means that if it meets its 2017 targets China will cut oil, coal and gas imports by 45%.

China’s recent investments in hydroelectric, wind, solar and nuclear-power generating facilities increased by 40% between 2008 and 2012 while the share of investment in fossil-fuel power facilities in China, meanwhile, fell from around 50% to 25% over the same period.

In 2013, the generating capacity from new water, wind and solar sources exceeded that of new fossil-fuel and nuclear facilities for the first time, as such clean energy now contributes 9.6% of the energy used in China, up from 5.6% in 2000. China generated almost 30% of electricity from renewables in 2013, two years before its national target. The Chinese government aims for renewables capacity to reach 550 gigawatts (GW) by 2017, or 48% above the 2013 level.

There are two keys to China’s success in renewables. Focused policies drive investment in selected sectors and encourage domestic take-up by measures such as feed-in tariffs, and industrial dynamics, including economies of scale and efficiencies gained through learning, drive down unit costs as the global market expands.